High school and collegiate sports today are extremely high pressure.  When injuries occur, athletes, coaches and parents alike want the athlete to be back in the game as quick as possible.  Major advances in ACL reconstructions and early intervention physical therapy are the focus when an injury occur.  Once the rehabilitation is underway, the next question becomes: “When can I go back to playing?”  And while aggressive return to sports can be a good thing, some studies are indicating a high failure rate when patients return to sports too soon after surgery.

In the early 1980’s I had very personal experience with re-injury after ACL repair. At the ripe young age of 19 and a competitive high school and college athlete, I experienced a complete rupture of my ACL during my freshman year in college.   I returned to sports in less than 9 months after surgery and unfortunately re-injured my knee. Thirty years later I ended up with a knee replacement.  Sadly, if I had known then what I know now, I would have delayed my return to college sports and in all likelihood avoided a lifetime of pain and limitations and a total knee replacement in my early fifties.

The results of a study published in the Journal of Sport & Exercise Medicine, commonly referred to as the “Delaware-Oslo ACL Cohort Study” show a substantial increase in re-injury rates in athletes that return to sports in less than 9 months post-surgery.  The findings of this study provide helpful information to consider prior to returning to sports as well as information that can help young athletes avoid a re-injury, developing severe osteoarthritis and perhaps a total knee replacement in later years.

The study points out that the most common reasons for ACL tears in sports are jumping, pivoting and hard cutting moves.   These movements are typically classified as “Level 1 Sports”.  The Delaware-Oslo ACL Cohort Study recommends that athletes should not return to Level 1 Sports (i.e. soccer, football, basketball) until they regain 90% or more of their quadriceps and hamstring strength and have the ability to hop on the injured leg.

The study used strength testing, single-leg hop tests, and self-report information to determine levels of strength and abilities. Athletes that participated in Level 1 Sports earlier than 9 months after surgery sustained 40% re-injuries compared with 19% in those returning later than 9 months. A decrease in quadriceps strength (major muscle on the front of your thigh) was the most significant predictor of a knee re-injury.  Fifteen of the 45 athletes who returned to Level 1 Sports with quadriceps strength less than 90%, suffered a re-injury.  For every month that the return to sport was delayed, until 9 months after the ACL reconstruction, the rate of knee re-injury was reduced by 51%. 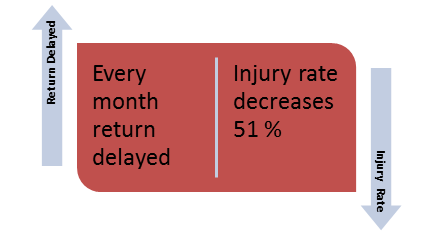 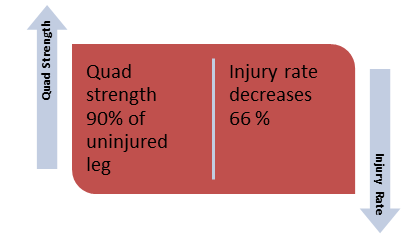 A few months and a little more strength now could save you a lifetime of pain and surgery.

For a comprehensive, data driven approach to your rehab, contact ErgoScience at 278-2250