I tore my ACL in 1981, playing college basketball.

I continued to stay active, playing tennis and women’s basketball in a church league for several years.

In 2004, I hurt my knee again playing women’s league basketball.  You would think at 42, I would have given that sport up by now.  But no……

So from age 42 until 51, I continued to have knee pain and a progression of deformities that made it difficult to stay active and even to play a little tennis on occasion.  I tried the injections, which would help for a while, but the pain didn’t go away.

At this point I had so much genu varus “bowed” on my right leg.  I was starting to fear that I would tear my LCL ligament it was so deformed.  I began wearing an unloader brace to offset this for when I played tennis or any kind of activity.

So in January of 2014, I decided to have my knee replaced.  Best decision I ever made!

I have little pain and my range of motion is so much better, than it was prior to the surgery.  I had a very good therapist and I say that not because it is where I work.  He truly did a great job.  Not to take anything away from the surgeon.  He did a great job!

I have 130 degrees flexion and 0 degrees extension.   I can walk up and down stairs normally and I can do all things I love to do.  I’ve been able to start back playing tennis and even played some beach volleyball since the surgery.  Loving my new freedom with less pain with the activities I love. 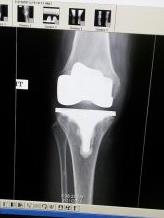